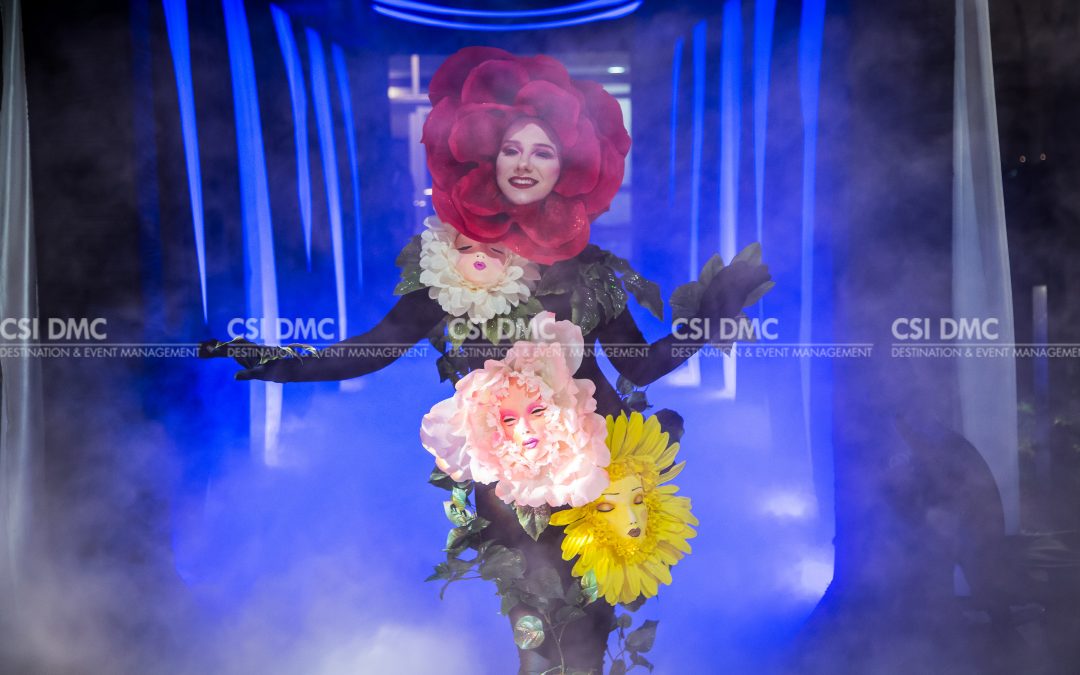 Curiouser and curiouser! This evening’s concept unfolded before guests’ eyes as they explored a vast tropical resort, where an indoor ballroom and pool deck were transformed to suit the host’s requests for their 2019 program. With 1,300 attendees from the home construction and design industry in attendance, expectations were high for their kickoff party in Florida. No strangers to a good theme, guests were accustomed to a different costume party each year of their get together–no one wanted to miss out on the action! Over 90% of attendees dress up annually for the event, making the theme a high priority when the client approached CSI DMC to design and produce their program.

From the start of the planning process with CSI, the Alice in Wonderland theme was the only concept the client wanted to pursue. CSI focused on using all of the event spaces, keeping things cohesive across the property, and including details that brought Alice’s world to life. Apart from its thematic design, the event also showcased seven distinct, high visibility sponsors with unique branding opportunities.

With these elements in mind, CSI selected multiple elements from Alice’s Adventures in Wonderland. Reviewing the venue layout, CSI decided to use the lawn as the base of operations, with auxiliary spaces emanating out from that arrival point. The event began with guests traveling from the hotel through a striated rabbit’s tunnel, led by dancing flowers and animal hosts right out of Lewis Carrol’s novels. Smoke filled the floor, spilling out into the lawn rife with characters, oversized décor elements, and projected clock faces running up the exterior walls of the hotel. Recalling the Caterpillar’s lounge, neon mushrooms blossomed from the lawn itself, while bright linens alternated with wooden kings’ tables. A large four-sided bar served as the focal point, with illustrations of characters like the Cheshire Cat. Evoking Alice’s adventures with potions and doors at the start of the novel, keys to unlock hidden doors were woven into greenery walls that also served as backdrops to mismatched seating groupings. The entire area was illuminated with hooped arches of greenery, which echoed the mushrooms’ shapes, and string lighting.

Just beyond, the Red Queen’s chessboard from the Looking Glass novel was brought to life with the resort’s pool echoing the shape of the board, and filled with floating playing cards! The queen and her throne were present, socializing with guests and allowing for a regal photo opportunity. Tables in the Queen’s court included red, black and white colors exclusively, with miniature crowns, roses, and candles laid out in vignette centerpieces.

Nearby was the Mad Hatter’s Tea party with the plethora of built-in TV screens showcasing the sponsors. CSI’s in house design team crafted a video of steeping tea, where psychedelic colors sequenced with sponsor logos on loop all night long. Bright pillows and low tables were arranged into a remix of the tea party table, and Victorian furnishings appeared in groupings that Lewis Carol would have felt right at home with.

Interior décor for the VIP garden followed the event’s imaginative inspiration, mimicking the garden motif for VIPs at a separate party. Having ignited their imagination with Alice, the interior event brought a more sophisticated reinterpretation of the lawn, with trellises of champagne flutes that were sniped down by enrobed attendants, living fountains, strolling violinists, and a backdrop of shooting star lighting.

Overall, Alice’s wonderful event was a roaring success due to the highly immersive theme that encouraged constant socializing and excitement. While recognizable as a concept, this interpretation of Alice’s adventures in Wonderland was new and different in its implementation of multiple Lewis Carroll elements across such a large event space, and its volume of interactivity allowed for high guest satisfaction. From details like miniature bottle invites labeled “Drink Me” with the party information, to picture-perfect details atop tables, lighting, and characters, this version of Alice’s world enmeshed the concept throughout the expansive event spaces. 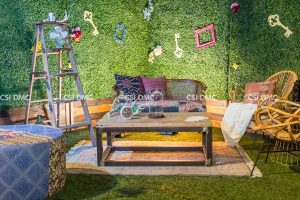 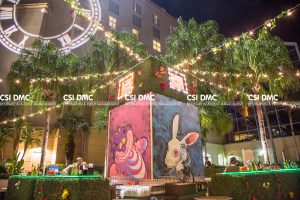 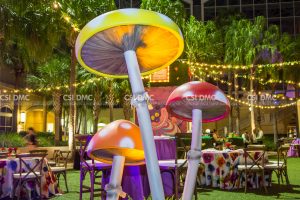 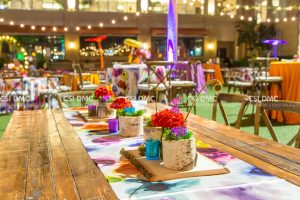 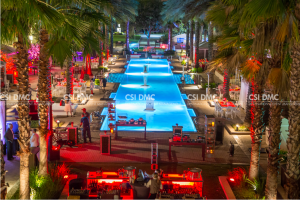 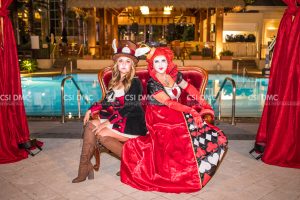 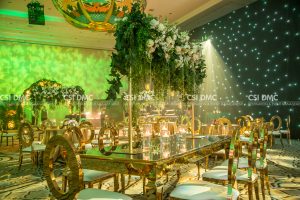 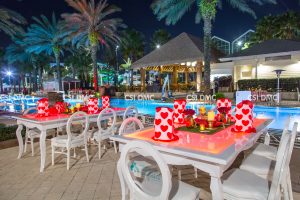